We are delighted to welcome back the de Havilland Philharmonic Orchestra for their first concert in over 18 months. This much awaited afternoon concert brings a stunning programme of chamber music, showcasing the Woodwind and String sections of the Orchestra.

The audience will be treated to a repertoire of four works, composed over a fifty-year period from the 1890s – 1940s:

Richard Strauss’ Sonatina No. 1 for 16 wind instruments in F major (1943) is a late work and bears the subtitle “From an Invalid’s Workshop”, reflecting his convalescence from an illness at the time of its composition.

Serenade for Strings in E Minor, Op.20 by Edward Elgar (1892) is an early piece in three short movements and has become one of Elgar’s most popular compositions.

Peter Warlock’s Capriol Suite (1926) is a set of dances and is one of the composer’s most well-loved works. Originally written for piano duet, he later scored the piece for string and full orchestras.

The Simple Symphony, Op. 4 (1933-4) by Benjamin Britten uses elements he scored as a teenager and is dedicated to his childhood viola teacher. 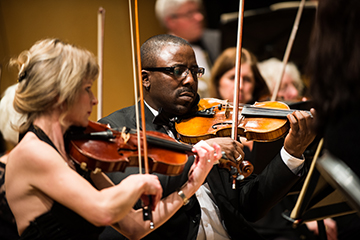 Music for an Autumn Afternoon

Poetry about family and storytelling in celebration of Black History month