Necessary Amendments: Homes for the People

Necessary Amendments: Homes for the people is a new film that looks at the homes and residents of three post-war British towns; Basildon, Harlow and Hatfield. The film is an attempt to speak to and represent people who live somewhere ‘new’ which of course in most cases is now far from new. How do people feel about where they live? What has the people who went before them had to say about it? The decision to work directly with residents arose out of lack of material and information found in the extensive records of British new town developments.

Over the last year, Whipps has been visiting archives, talking to residents, photographing and filming in three locations – Harlow, Basildon and Hatfield. The film was screened in each of the towns following on from the summer exhibition at UH Arts Art + Design Gallery.

New Geographies is funded by the National Lottery through Arts Council England Ambition for Excellence, which supports ambition and excellence across the arts sector in England, particularly outside London. Between 2015 and 2017, Ambition for Excellence offered grants to projects which would contribute to the development of great places, foster international collaborations, support talented artists and arts leaders across England and produce work for outdoor settings. 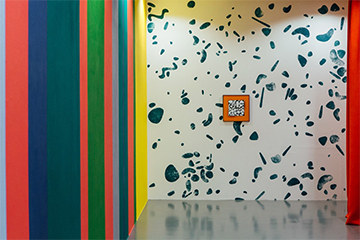 Join artist Katie Schwab as she experiments with new ideas, turning the Gallery into an open studio.